The RICH BACKSTORY of Shopcat 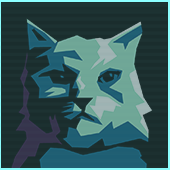 The RICH BACKSTORY of Shopcat is a short story by Klei developer Kevin Forbes, which explains the origin of ShopCat. It was posted to the official Invisible, Inc. forum on 21st October 2014.

Shopcat was a normal cat once, roaming the abandoned canals of New York City. Lounging quietly by day and Hunting by night, she gave little thought to the comings and goings of the twolegs. Life was simple, and life was good.

But one night, she found a delicious smell coming from a drainpipe. Normally she wouldn't have risked the trouble, but the Hunt had been bad of late. It was rainy season and the rats had gone to ground. She was hungry, and hungry cats make bad decisions. Just two careful steps into the pipe and a hard metal grate dropped down and trapped her inside. Soon after, the Doctor came.

She doesn't remember much from the beginning of her time with the Doctor, and she doesn't care to. Bright lights. Loud noises. The smell of burning hair. But most of all, pain.

There wasn't a particular moment that marked her transition from cat to something-more-than-cat. It came slowly, each strange new impulse or thought jumping into her head suddenly and then receding for a while. In time though, she came to realize what was happening to her — what the Doctor was trying to accomplish in his unlicensed laboratory hidden deep within the creaking hulk of an abandoned skyscraper in the middle of the Manhattan Flood Zone. She knew that she wasn't the first of his experiments, and that she wouldn't be the last. She came to realize what she had to do if she was going to survive.

She bided her time. She endured the 'treatments', getting smarter and getting stronger with each, but always trying to hide the true extent of her transformation. If her plan was going to work, she would need to keep a part of herself secret. She would have to maintain the element of surprise.

Afterwards — after the fire, the blood, and the darkness, as she dug her way out of the rubble of what was once a laboratory, she asked herself: 'What now? Were do I go from here?“

She knew that she wouldn't last long back in the canals. She still loved the Hunt, but she knew that it wasn't enough. The foreign chemicals sloshing around in her head and the bright flashing machinery that bent her thoughts into man-shapes wouldn't run on the carcasses of rats and birds. They would slow down and eventually grind to a halt, and as they did, they would kill her. She was more-than-cat now, and she had more-than-cat needs.

A tiny corp drone flitted overhead as night began to fall. She had seen them all over the Zone for her entire life, but had never until now given them a second thought. It must have a base station somewhere close by, with a power source and replacement parts, and most importantly, a data uplink. The thought bender knew what to do with that. It whispered instructions to her inside of her head, and then she knew too.

The next time a drone flew past, she took off in pursuit. It felt good to be back to the Hunt after so long inside.