You are here: index » lore
lore:index

It's 2074, and corporations rule the world with brutal efficiency. They hit you hard, and now you're on the run.

You need to strike back, but you'll never win by force. Keep your agents alive with stealth and cunning. Raid the corps' facilities for tools and support, and prepare your team for the final showdown.

The odds are stacked against you. You will fail. Repeatedly. But each time you will learn more about your adversaries, and every restart generates a new world of dangers and opportunities.

You have a tough job ahead of you, Operator. Don't let us down.

The Resource Wars were a series of global conflicts surrounding corporations usurping power from world governments. There were conflicts between governments (and their agencies) and corps as well as between the corps themselves. They began approximately in 2053[1] and lasted at least until 2060[2]. However, open hostilities between the major corporations had largely ceased after the San Francisco Accord, adopted no later than February 15th, 2059, indicated by the existence of the K&O and Sankaku Pacific Joint Development Region[3].

The end of non-corp opposition occurred in 2057 with the defeat of the PEIA[4].

The San Francisco Accord

The San Francisco Accord laid down new rules for life under corporate rule and, presumably, inter-corp peace agreements. The earliest reference to the San Francisco Accord is in Sharp's data log, dated February 16th, 2059. It is still a hot issue that is discussed in May, 2060 in Internationale's data log. As such, it was likely implemented over the course of several years, starting sometime after the defeat of the PEIA.

Notable elements of the San Francisco Accord include the Unincorporated Personhood provisions, which allow overriding basic human rights for profit and (among other things) legalise bounty hunting and assassinations.

The PEIA was a presumably Europe-based intelligence agency founded sometime before 2043[5]. When the Resource Wars broke out in 2053, the PEIA became the prime (and eventually, only) opposition force to the corporations. Known members of the PEIA include Olivia “Central” Gladstone (long-time member and director of the PEIA in the 50's), Derek “Monst3r” Mossman (recruited either in the 40's or early 50's), Rush “Collette” Phan (2053) and Matei “Draco” Cernat (2053).

On July 8th, 2057, the agency (likely a team of Olivia, Derek, Draco and Rush) undertook a high-stakes mission to assassinate the Joint Board of Directors during a secret meeting at the Istanbul Hotel (location unknown), perhaps a meeting where the San Francisco Accord and inter-corp peace talks were being planned. The mission failed due to the intervention of a lone Plastech security detail and several agents were captured. According to public view, the entire team, including Olivia, was executed in a public event. In reality, at least Olivia and Derek survived the Istanbul Run, but Draco and Rush were likely among those executed.[6]

Post Resource Wars, in 2074, the territories of the world are roughly equally distributed between the four major corporations. K&O (grey) controls the entirety of Europe, part of the middle east, Australia, and Greenland (as well as Hawaii). Plastech controls South America, Africa, the Carribean, and Madagascar. FTM controls the entirety of North America, minus Hawaii. Sankaku controls most of Asia, Indonesia, and the Pacific Islands. 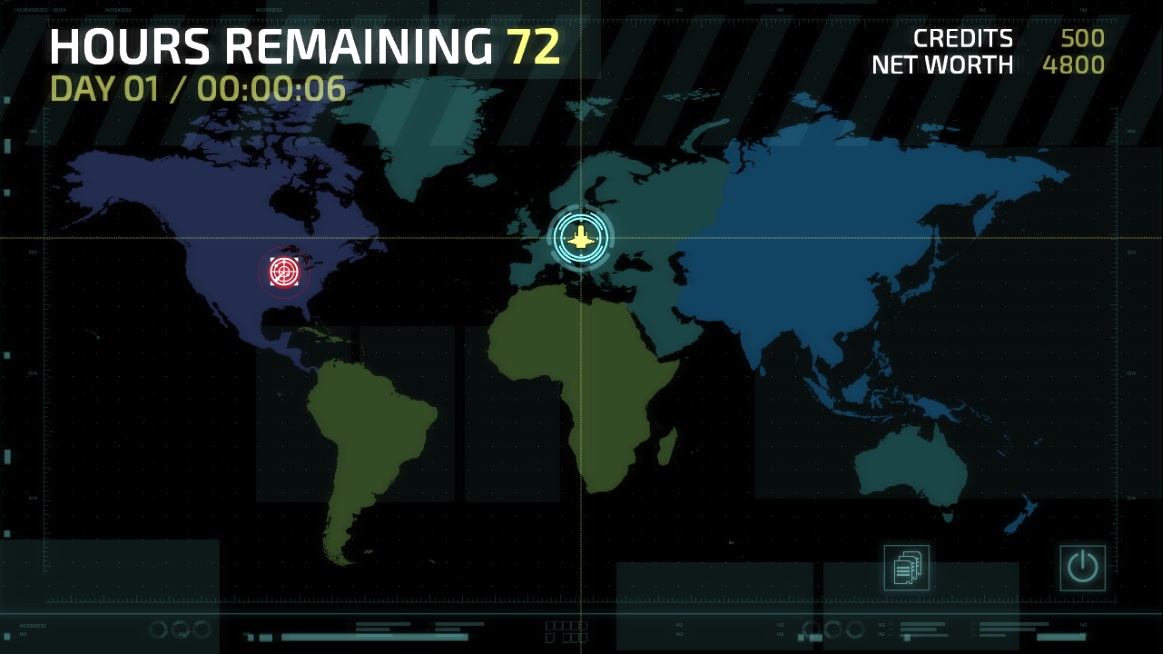 The following locations are possible infiltration sites in the game.

UNAG, United North American Government
Its territories were annexed by FTM during the Resource Wars.

Neural Redaction
Some form of memory redaction procedure, more expensive and presumably less damaging than the alternative of outright removing parts of the brain.

Holovids
Seen with a pair of goggles at the least, and possibly with other hardware may allow for auditory, visual, and emotional experiences. Probably a fully immersive experience. Have not been referred to “The Movies” since the 2030s. A “Senso” may be a type of holovid, implied that they are overwhelming.

The 'Woods
Likely refers to Hollywood and Bollywood.

SubNet
Likely some form of network, possibly similar to TOR. It is used for messaging and keeps Chat Logs.

Consoles
XB-37a is a form of console (commonly used in facilities in 2074, looks very similar or exactly like the console in-game.)

Datasphere Annihilation
A procedure where someone is rendered incapable of using a neuro-data interface.\\.

Neuro-Data Interface
A way of interacting with an electronic device directly via non-conventional means.

Credit
Unit of currency already in use Pre-Resource Wars.

The full timeline of known events in Invisible, Inc. can be found here.

K&O sued the Unified North American Government for 'lost profits' after UNAG canceled military procurement contracts after the onset of the Greater Depression. Since UNAG was insolvent, K&O opted to take payment in kind. The CEO at the time had a soft spot for Waikiki Beach, and so demanded the entire state of Hawaii. A 100 year lease was stipulated by the World Economic Court at the ceremonial cost of 1 credit per annum.

FTM would later annex UNAG's territories during the Resource Wars. It maintains that it also inherited the terms of the Hawaiian lease, and makes a great show of sending K&O an invoice for a single credit every year. K&O refuses to pay, but sends a fruit basket and a “don't you wish you were here?” post card to FTM head office every Fiscal New Year.[7]

Invisible Inc. Headquarters is located in Budapest, based on the starting location during the campaign.

The RICH BACKSTORY of Shopcat

[1], [2] Internationale
[3] Sharp
[4] Prism
[5] Olivia was already a PEIA agent in 2043 and must have joined some years prior, at which point the PEIA was still a fledgling organisation
[6] Note: Since much of this information comes from The Istanbul Four, a corp-approved fictionalised retelling of the end of the PEIA, there is some ambiguity regarding which details are fact and which are corporate propaganda.
[7] https://forums.kleientertainment.com/forums/topic/53805-corporate-exclusivity-zones/?do=findComment&comment=636469
lore/index.txt · Last modified: 2022/08/03 16:35 by hekateras