You are here: index » stealing
stealing 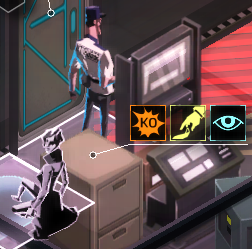 Banks can steal from this guard from behind.

“Guards are just safes who haven't been EMP'd yet.”
—Hekateras

Agents can steal credits and items from most guards. To steal from a guard, the agent must stand on an adjacent tile, or on the same tile as the guard while pinning them.

The ability to steal, and the reward for stealing, depends on the agent's Anarchy skill level:

The bonus to credits and items only affects pickpocketing, not safes or other loot.

A guard stolen from by an agent with Anarchy 5 will be marked as “This unit has been searched by an expert”.

The additional items and credits available to an agent with higher Anarchy will always be present in the guard's inventory, but will only be visible to agents with higher Anarchy. In other words, the guard's inventory does not “lock in” the moment you search him; leaving the guard's inventory untouched (or only taking a keycard) and coming back with a higher-Anarchy agent to search him later will reveal greater loot. The option to loot the extra credits is not available if he's already been looted for credits. For that reason, it's best to save the guard pickpocketing for a dedicated agent with high Anarchy to get the most out of the credit bonus.