You are here: index » ko
ko 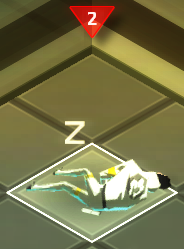 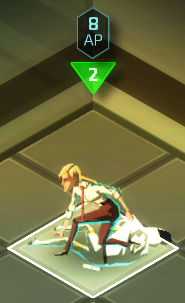 Humans including guards and agents can be knocked out, usually when they are attacked with non-lethal weapons. While knocked out, the unit is inactive; they cannot move, attack, or use items or most other abilities, and they have no vision or hearing. Knocked-out units also do not block or impede other units' movement; it is possible to walk over them with no penalty.

Guards, agents, or a rescued Courier or Prisoner become knocked out whenever KO damage is dealt to them. KO damage is dealt by non-lethal weapons, Flash Grenades, Flash Packs and Shock Traps, the augment HoloCircuit Overloaders, and when guards breach doors. Agents also become knocked out after using an Augment Grafter or Augment Drill to install an additional augment socket.

Being knocked out is a temporary status. Knocked-out units eventually wake up unless they are kept pinned; additionally, a knocked-out agent can be woken up using a Med Gel or a Stim.

Knocked-out units can be distinguished from lethally-wounded units by a triangular icon above them showing their KO timer, a “zzz” animation, and the lack of blood. The triangular icon is green when the unit is pinned, otherwise it is red.

All drones are “KO immune”, meaning they cannot be knocked out. However, they can be rebooted for various reasons, which has similar effects to being knocked out.

While a unit is knocked out, this is indicated by a red or green triangular icon containing a number — the number is the unit's KO timer. The KO timer is initially equal to the amount of KO damage dealt to the unit, unless the unit is a guard with KO resistance.

At the start of each player turn, every knocked-out unit's KO timer is reduced by 1, unless the unit is pinned. When a unit's KO timer reaches 0, they wake up and become active again; when a guard wakes up after being knocked out, he also becomes alerted (or if he is a civilian, he panics instead).

A guard's KO timer can be increased using a Paralyzer, or by attacking him again with a weapon which deals KO damage. However, when a knocked-out guard is attacked, their KO timer is reset to the KO damage done by the new attack; it is not added to their existing timer. KO timers can also be reduced by the daemon Jolt.