You are here: index » armor
armor 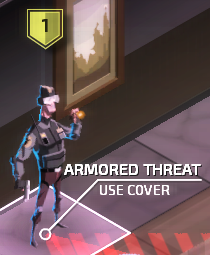 The corps are now issuing high-tension personal armor to their security forces as standard equipment. I think they're getting scared of us. It would be flattering if it didn't represent an existential threat. Make sure you bring along something extra pointy for emergencies.
—Central

Armor protects guards against attacks using weapons, including attacks made during the enemy turn while on ambush or overwatch, and including attacks made by agency-controlled drones or Turrets. Armor does not protect against items such as Flash Grenades or Shock Traps, nor against TAG Pistols, regardless of the guard's armor level. Armor also does not protect guards against agency-controlled lethal Laser Panels.

An attack's armor piercing is determined by adding the following values:

There is no benefit for having more armor piercing than the target has armor; an attack either can or cannot hit a target.