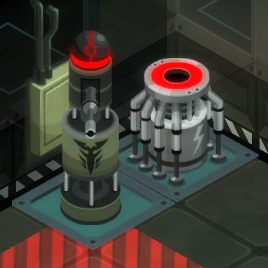 A Turret and its connected Power Supply. 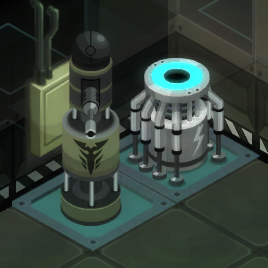 The Turret has been disabled by hacking its Power Supply.

Turrets are security measures which occur in K&O facilities at mission difficulty 2 and higher. They are automated weapons which can overwatch and shoot agents in the Turret's vision, dealing lethal damage.

Turrets provide soft cover, allowing agents to hide on adjacent tiles. (Of course, a unit right in front of a Turret is not in cover from the Turret itself.) Turrets can be destroyed using lethal weapons, permanently disabling them; there is no cleanup cost associated with destroying a Turret.

The number of Turrets found in a K&O facility depends on the mission difficulty; generally, higher-difficulty K&O missions have more Turrets.

This turret's been compromised!
—Guard

When a Turret is hacked, if it has not also been deactivated by hacking its Power Supply, then it gives vision to the agency, and overwatches and shoots guards.

When a guard moves in a hacked Turret's vision, the Turret goes on overwatch, and the guard stops moving for that turn. - this will usually result in the guard not being shot this turn, with a few exceptions. However, the guard is likely to be shot next turn when he tries to move unless the turret is turned off, or something else gets shot first. Once a turret has shot a guard, it will be identified as a traitor for as long as it is turned on and remains in agency control. If a traitorous turret is seen by a guard, they will overwatch it and become alerted; if they do so, they will always shoot it before it shoots them. The turret can be turned off to prevent it from being shot in this case.

When a turret shoots, it creates a noise in a range of 8 tiles, causing nearby guards to investigate. This can trigger sound bugs in range (though this situation can only happen in Vault missions). A turret can shoot only once per turn, and has 2 bullets - it will continue to overwatch after it has used up its bullets, but it cannot shoot. A turret's bullets have armor piercing 2.

If a turret is watching a place that you need to pass through, you'll need to either hack it, hack its power supply, use a cloak, or destroy the turret. Hacking the power supply is usually your safest bet as it neutralizes the turret and avoids drawing the attention of guards, though it's possible that a dangerous daemon on the power supply might change this calculation.

If you hack the turret itself, you risk it shooting a guard, causing an alarm tracker hit from his Heart Monitor. In addition, it's likely that other guards will come to investigate the loud noise it makes. This will happen during the corporation's turn, so you may not be able to react to this. Once they arrive, both the turret and the body will alert guards if they see them. It is possible to kill key guards, such as Spec Ops, using turrets, which can be helpful if you're able to manage the risks. In addition, Draco can get skill upgrades without having to use the agency's lethal weapons, saving credits.

If you are able to hack both the power supply and the turret itself, you can use it to manipulate a single guard's movement by toggling it. Since guards stop when overwatched, you can use it to prevent a guard from moving somewhere you'd rather he not be, and then turn the turret off once you've safely moved away. You can even toggle the power on the turret every turn to cause the turret to overwatch the guard every turn without shooting him, making him move just 1 tile per turn. Beware though - if another guard enters the turret's vision while this is happening, that guard will be shot, likely resulting in the turret being overwatched.