You are here: index » vision
vision

Vision is a core mechanic of Invisible Inc. - being able to see guards is crucial, so that you can ensure that they cannot see you.

Entities that have vision will have an vision arc and a vision range. Their vision arc's center point is the center of the entity's tile (with the exception of Security Cameras, whose center is at the corner of the room that it is mounted in), and the bisector of the arc is the line that starts from the center of the arc and travels in the direction that the entity is facing. The vision range is the diameter of this arc.

A tile is visible to an entity if it has vision on at least 45% of its area. 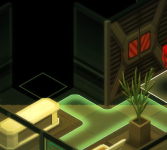 An unrevealed tile - anything could be here. 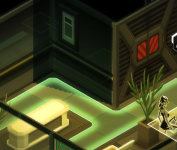 This tile is now revealed because Prism sees it. Even though not all of its area is in Prism's vision (as indicated by the shadowy corner), enough of it is that the tile is considered seen and has been revealed, including the wall that's fully in the shadow. 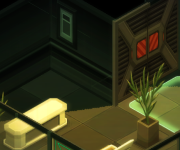 This tile is still revealed, but is no longer seen, as indicated by it being in shadow. There are guaranteed to be no stationary objects there, but a guard could be here.

When an agency-controlled unit has vision on a tile for the first time, that tile is permanently revealed to the player. Any stationary objects on that tile are permanently revealed to the player, including mainframe devices, as well as adjacent walls and doors (or lack thereof), even if the agency-controlled unit does not have vision on the side of the tile where the door or wall is. If a tile is revealed, then adjacent tiles, if not revealed and not blocked by a wall, will show a white square to indicate that there is a tile there.

On Expert Plus or on Custom settings with “Show danger zones” disabled, tiles that the agency has vision on will only show corporate vision on that tile for entities which the agency also has vision on. It is not enough for the corporate entity to be revealed; it must currently be in agency vision.

Any mainframe devices that have been revealed can be hacked in Incognita View, and will permanently remain hackable, with the exception of guards with firewalls, such as Drones, who are usually no longer hackable the following turn if they have exited agency vision.

All agency-controlled units, including agents, rescued Couriers or Prisoners, and hacked Drones, have 360° vision and an infinite vision range. Hacked Security Cameras and Turrets have the same vision they usually do when under agency control.

Corporate vision makes the tiles seen trigger security responses whenever out-of-place things are on them, such as agents, rescued Couriers or Prisoners, traitorous drones or turrets, downed bodies, or suspicious items. The response depends on what is seen, who is seeing it, and whether it is seen in primary or secondary vision.