Guards behave in defined, often predictable ways. By default, most guards are either stationary or patrolling; guards react to agents and other suspicious things in their vision, noise, and other triggers from some security measures or mission-specific events. Guards can also change their status on some alarm level changes.

Information about a guard's current status is given by the status icon (if any) shown above them, and further information can be revealed by observing them.

Due to a bug in the game, the Captain in a Detention Center and the Financial Executive in a Chief Financial Suite do not remember which direction to face when they return to their stationary position, so they will remain facing the direction they took to walk back. 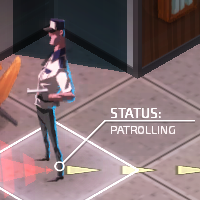 A patrolling guard has two patrol points. Provided that he is not investigating something unusual, his goal in any given turn is to walk to the patrol point he has visited less recently.

Guards that start the mission patrolling will always start on one of their patrol points, but their initial facing direction may not be a direction he'd naturally be facing during this patrol.

On Beginner, a guard's patrol points will always be in the same room, and will always have a shortest-path of 5 tiles between them. On Experienced and up, the shortest-path between the two tiles will be equal to the guard's AP (which is usually 8), and they will often be in different rooms.

Patrolling guards usually have a 2-turn patrol cycle because they will always reach a patrol point every turn. Interest points can disrupt this temporarily. In addition, if two guard patrol routes interfere with each other, the guards may need to make extra moves to get out of each other's way, making 3 or 4-turn patrol cycles possible.

I think I saw something.
—Civilian 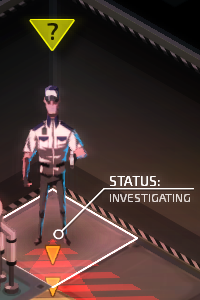 A guard who is investigating.

Investigating… guess it was nothing.
—Guard

The status icon of a yellow triangle with a question mark indicates that a guard is investigating.

If a stationary or patrolling guard receives an interest point without becoming alerted, they will move towards the interest point, and investigate it when they reach it:

If the guard is investigating because they noticed a door open or close, then they will turn to face through the door, and open it if it is closed, before peeking or scanning. When a guard investigates their interest point, their next behaviour depends on what they find:

The status icon of a red triangle with an exclamation mark indicates that a guard is alerted. Once a guard is alerted, they remain alerted as long as they are active in the mission. Guards are more dangerous when they are alerted, because they actively hunt around the whole facility for agents, and their movement becomes much less predictable.

There is one confusing point here - when a guard has an ability referencing becoming Alerted (e.g. flack guards and sirens), this does NOT mean changing state to alerted state, in the above sense. Rather, it refers to the situation when a guard sees an agent, a rescued Courier or Prisoner, or a traitorous drone/turret, causing them to shout and go onto overwatch. This means that such abilities still trigger if the guard was already alerted before the shout, and do not trigger when these guards become alerted in other ways, such as alarm level 5. 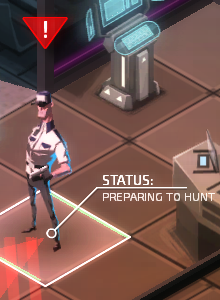 A guard who is preparing to hunt.

At alarm level 5, all guards in the facility who were not previously alerted will prepare to hunt. Each guard's interest point will be their own current location, unless they are the nearest guard to the agent who is located, in which case their interest point is that agent's location. 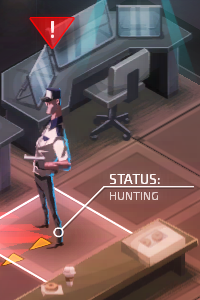 A guard who is hunting.

You can run, scum, but you can't hide!
—Guard

When a guard is hunting, he is actively looking for agents. A hunting guard always has a specific tile of the facility that he is heading towards in order to investigate. When he reaches this point and doesn't find anything, he will go somewhere else in the facility. When this happens, the hunting guard's new interest point is not revealed to the player except by observing him or causing him to be TAGged - if the guard is already TAGged, his interest point will not be passively revealed.

Hunting guards are trying to sweep the whole facility, and when they're deciding where to go after investigating, they will search the closest area they haven't previously explored. (“Area” roughly corresponds to “room”, but some large rooms may have multiple areas).

Hunting guards can be distracted by anything that would distract or alert other guards, and will reset their sweep of the facility when this happens.

In any situation where an armed guard or drone would become alerted, civilians will instead panic. A panicking civilian will run towards the nearest guard entrance that they have a valid path to. Once the civilian reaches the guard entrance, they teleport out of the facility.

While a civilian is panicking, they will still track agents or other targets in their vision, but their behaviour never changes from panicking.

Due to a bug in the game, if a panicking civilian has no valid path to any guard entrance, the game gets stuck during the enemy turn, and the player must press the Esc key to continue the game. Other guards will not move or perform any other actions, even if they have not already moved or acted yet during that enemy turn. 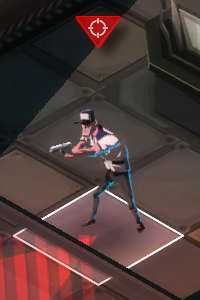 A guard who is on overwatch.

STOP THERE!
—A guard

When an armed guard sees a non-KOed, non-lethally wounded agent, a rescued Courier or Prisoner, or a traitorous drone/turret with their primary vision, they immediately turn to most directly face the spotted enemy, shout and alert all nearby guards, and overwatch the seen enemy or enemies. If any guards hear this shout and are able to see the spotted enemy by turning, they will immediately do so and overwatch the target as well.

If an overwatched enemy performs actions that do not result in the guard no longer being able to see them, the guard will shoot that enemy, dealing lethal damage. In addition, if the enemy is still in the guard's vision at the beginning of the corporation's turn, they will be shot as well. (A few actions will not cause an overwatching guard to shoot, such as using a Buster Chip, and inventory management actions, such as equipping, dropping, picking up, or trading items.)

Agents and other agency-controlled units can escape overwatch themselves with any action that immediately results in them not being seen by any overwatching guard, such as:

In addition, other agents can assist the overwatched agent by closing doors or attacking the overwatching guards, and Incognita can sometimes help with Shade or Lightning, or by hacking overwatching drones. If an enemy escapes overwatch, the guard will gain an interest point on that enemy's current tile after escaping.

As long as a guard is overwatching and sees at least one enemy, they will not respond to any other distractions and will not remember them. They will immediately shoot any enemy that enters their primary vision cone, even if they did not originally overwatch that enemy.

Unarmed drones follow all the same rules that armed guards do, except that they cannot shoot. In addition, Camera Drones and Refit Drones do not shout and alert other guards when they see an enemy - the effect of being seen by them is similar to that of being seen by a security camera.

Enemies that a guard has seen are tracked by that guard (in addition to overwatched if the guard is armed). This means that the guard will turn to most directly face tracked enemy if they move while in the guard's vision, including peripheral vision. Armed guards can immediately shoot the tracked enemy if the guard sees them after turning. This means that it is not possible to escape a guard overwatching at point blank range by trying to move around them.

If a tracked enemy opens a door that is noticed by the overwatching guard, the guard will turn to track that enemy's next move.

A guard will not turn to track enemies moving through his peripheral vision if the enemy was not directly seen by the guard, and therefore isn't tracked. It is, however, possible for a guard to attempt to track multiple enemies at the same time.