You are here: index » rebooting
rebooting 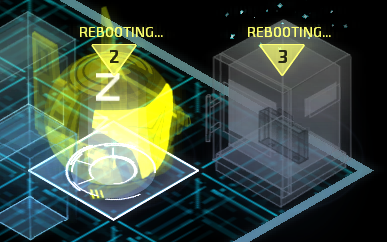 An Akuma 2.0 and a Corporate Safe that are rebooting, as shown in Incognita View. Note that rebooting drones are animated with Z's, just like KOed guards.

Mainframe devices can be rebooted for various reasons. While a device is rebooting, it is temporarily disabled, and a “reboot timer” is visible in the Incognita view showing the number of turns until the device finishes rebooting.

Devices can be rebooted by EMP Packs or Dr. Xu's Subdermal Tools, by the daemons Echo and Failsafe, by the program Fool, by being in range of a Modded guard, or by scripted events in Cybernetics Lab and Nanofab Vestibule missions. Additionally, drones reboot after being hacked and controlled, and Emitters reboot when walked through in some circumstances.

The value that the reboot timer starts at depends on why it rebooted:

* Note that drones cease to be controlled at the beginning of the agency turn, and before drones have their reboot timer lowered at the beginning of the agency turn. This means that unless the drone is immediately pinned because it was on the same tile as an agent or guard when it ceased to be controlled, its reboot timer will be 1 when it can first be observed.

Note that EMP Packs detonate after devices have their reboot timers lowered at the beginning of the corporation's turn, so their counter will not immediately decrement after being hit by the EMP blast. (It also means that devices such as Security Cameras and Emitters with a reboot timer of 1 will briefly turn on before getting hit by the EMP Pack).

Certain scripted events, the Echo daemon, the Failsafe daemon, and guards with the Hacker ability can cause agency-hacked devices to be recaptured. When this happens, they are returned to the control of the corporation and gain 1 firewall. They will always reboot for 1 turn when this happens. Some Mainframe Devices cannot be recaptured.