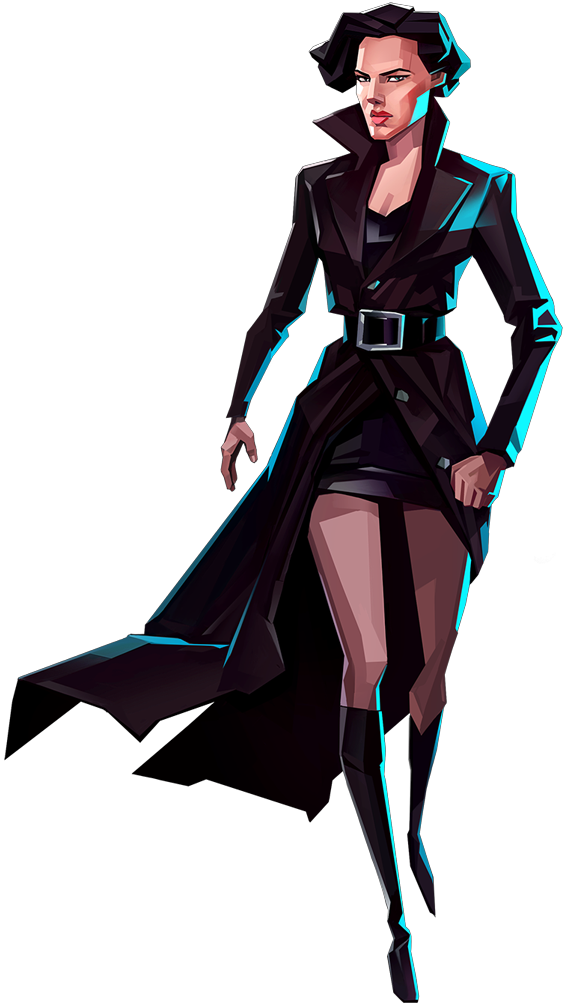 Even with the brain damage, Banks is one of the most effective hackers I've ever encountered. With stims and neuro-conditioning she's able to stay lucid, but I wonder what kind of long term effects that might have on her stability.
—Central

Jolie Murphy, known as Banks, is an agent employed by Invisible. She can be selected at the start of the game in either her on-file or archive variation.

Banks earned her hacker nickname siphoning funds from heavily guarded financial accounts. She funneled the proceeds into the rebuilding of her hometown, becoming a local folk hero in the process. After a botched cranial implant, she joined Invisible to get access to the most advanced neuro-rehabilitative care outside of Corporate law.

Banks has always had a way with finances, but she wasn't always so altruistic. In old Dublin she amassed a small fortune from embezzlement and graft, and lived a life of reckless abandon. She found her principles during the Fall Siege, and by the time Dublin Nua was finally liberated she had drained her private accounts several times over.

Archive Banks' unique Custom Econ Chip can be used at Consoles to gain credits instead of PWR. She initially has no augment, but she does have two empty augment sockets.

Some of Banks' back-story is described in her datalog.

Banks: Did you hear that?
Decker: Hear what?
Banks: I heard that. That was definitely real.
Decker: Okay, I heard it too.

Banks: You're not langered, are you?
Decker: Of course not. We have a job to do.
Banks: So you're completely on the wagon, then?
Decker: Woah, hey. Let's not get ahead of ourselves.

Decker: So you didn't keep *any* of what you stole?
Banks: Oh, I kept my belly full, but there were others with greater need.
Decker: You think they'd do the same for you?
Banks: Some of them. Definitely.

Decker: Hey burnout, how many fingers am I holding up?
Banks: Don't patronize me. We don't have time for this nonsense.
Decker: Three! The answer was three!
Banks: This is why nobody likes you.

Dr. Xu: Does your injury hurt?
Banks: Only when I'm awake. And also in my dreams. Other than that I'm bright as morning.

Banks: You've never been bitten by a Daemon?
Dr. Xu: No, I'm careful. I use proxies and wave filters to ensure my safety when I'm jacked in.
Banks: Where's the fun in that?

Dr. Xu: What's the toughest security you've ever cracked?
Banks: The one that fried my noggin. Thickest ice you've ever seen. Thirteen nested daemons, each with an amplifier.
Dr. Xu: Why did you even attempt that?
Banks: I couldn't just leave it there, could I? It was a matter of pride.

Banks: Do you think Daemons have souls?
Dr. Xu: They're just code. That doesn't even make sense.
Banks: I think they do. One of them has mine.

Internationale: I really respect what you did for your people back in Dublin.
Banks: Thanks. But anyone would have done the same, given the circumstances.
Internationale: Have you actually talked to any of the other agents?
Banks: Maybe you're right. I *am* something special.

Banks: How do your ear nubbins work?
Internationale: They're synesthetic couplers. They let me hear radio waves, so I can sense equipment from a distance.
Banks: Since the accident I hear things too! Like how angry the floor gets when you walk on it!
Internationale: That sounds… useful.

Banks: Do you know Robin Hood?
Internationale: Of course. It was one of my favourite stories as a girl.
Banks: No, not the story. The person. I could introduce you, if you'd like. I think you'd get along smashingly.

Internationale: Your headaches, are they getting better?
Banks: A bit, I think. But I may just be getting used to them.
Internationale: If there's anything I can do..
Banks: There isn't. But thank you for your concern.

These can also be found on the agent banters page.