You are here: index » doors
doors 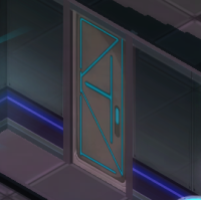 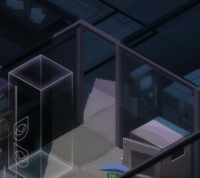 Doors allow passage from one room to a neighboring room. Agents, rescued Couriers or Prisoners, and guards can all open and close doors. When closed, doors are impassable and provide hard cover.

Usually, when agents or rescued Couriers or Prisoners open or close doors that guards can see, the guard will notice the door opening or closing on the side it was opened or closed on. This will happen even if the tile the door is adjacent to is in soft cover, as doors do not receive soft cover. Hacked drones and Archive Prism in disguise can open and close doors without causing guards to be interested.

Human guards, when not alerted, will usually leave doors in the condition they were in after they move through them. The only exception is when they open a door to perform a peek or when they are KOed, killed, or alerted before they have the chance to close the door. Drones and all alerted guards will always leave doors open when moving through them.

Guards, when alerted, can in some conditions destroy closed doors, rendering them permanently open and dealing 1 KO damage to any unit on the other side. Agents, Couriers or Prisoners KOed in this way will also start the next turn with 0 AP if they were not pinned before waking up. This can only happen when the guard's interest point is one tile beyond the door from the guard, and it usually happens because the guard noticed an agent close it. An Akuma Drone can also be hacked to “kick” down doors as well. 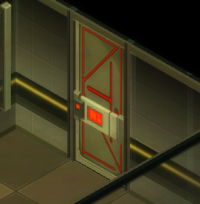 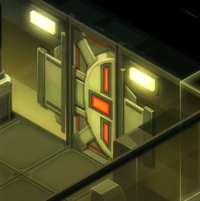 Vault Doors are doors that cannot be opened until they are unlocked by a Vault Access Card. They will only appear in Vault missions and some Cybernetics Lab missions. They will always be found in the Objective rooms of these missions, and need to be unlocked and opened to access additional loot.

Exit Doors cannot be opened until they are unlocked by a Exit Access Card. They appear in Endless modes from day 5 onwards, in all facilities. Unlocking the Exit Door is required to reach the exit room and complete the mission.

It is possible to set up a Shock Trap on these doors.

The best strategy for the player depends heavily on what game mode you are on. When playing a higher difficulty than you are used to, you may need to unlearn strategies that worked on lower difficulties.

On Experienced and higher difficulty, guards will have longer patrols that often go through a door, and they can patrol into the Starting room. This makes doors more dangerous to the player than on Beginner.

On Expert Plus, you can no longer be sure that a door is not seen by a guard when peeking through it while closed.

This means that you will always need to account for the possibility that a stationary guard is watching the door, even if you peek through it and listen for patrols. Because of this, on Expert Plus, you should avoid opening doors unless you are able to account for this possibility, even with a peek through the door. As a result, if you can account for this possibility, it can often be better to open the door (from a diagonally adjacent tile) without peeking, peek with the door open, then (if noticed) get to safety.