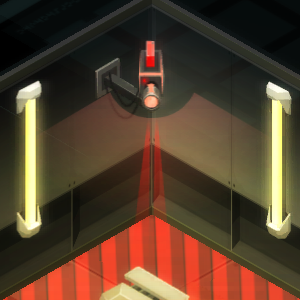 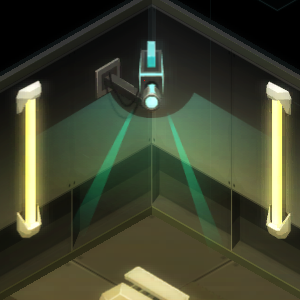 A Security Camera that has been hacked.

Security Cameras are security measures. They have vision with a range of 8 tiles and an arc of 90°, allowing the corporation to see agents on tiles that the camera sees.

Security Cameras are mainframe devices, and can be hacked to give vision to the player instead of to the corporation. They can also be rebooted to temporary disable their vision, or shot with lethal weapons to permanently disable them.

Security cameras can only be located in corners where two walls meet at a 90° angle, facing diagonally. They are never located in the starting room or in objective rooms. The locations of all Security Cameras in the facility can be revealed by hacking a Camera Database.

A Security Camera sometimes appears on the same tile as another device, such as a Console or a Corporate Safe. When this happens, the other device never provides cover from the camera.

Security Cameras are found in all facilities. The number of cameras depends on the mission difficulty; additionally, K&O facilities have fewer cameras than other corporations. 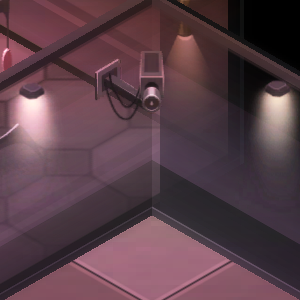 Some Security Cameras are inactive, meaning they have no vision and cannot be hacked or rebooted. When alarm level 1 is reached, these cameras will reboot for 1 turn and then become active. In Beginner mode, this happens instead at alarm level 2.

In the extended campaign, there are no inactive cameras in or after the OMNI Foundry Lab mission.

Being seen by cameras

That camera will keep making things harder for us Operator. Incognita has a program to deal with it.
—Central

When an agent steps on a tile “watched” by a Security Camera, the alarm tracker is raised by 1 step, and at least one nearby guard will come to investigate the tile stepped on. The text REC⏺ will appear next to the camera, to indicate that it has been triggered. This happens at most once per turn per camera, so even if the agent (or another agent) steps on other tiles seen by the camera in the same turn, the interest point will always be the first tile where that camera saw an agent that turn, and the alarm tracker is not raised further.

Security Cameras are triggered by movement and peeking, so if an agent is in a camera's vision at the start of the player's turn, they will only trigger the camera by moving to another “watched” tile, or peeking from the “watched” tile they are already on. Additionally, cameras always “see” immediately after rebooting, including cameras which were previously inactive.

Security Cameras are also triggered by a rescued Courier or Prisoner, but not by hacked drones.

It is usually best to hack cameras (or reboot them using EMP Packs), to avoid being seen by them. Hacking cameras also gives you vision of rooms you aren't in, allowing you to know where the guards are and observe their movement. However, if there are cameras in empty dead-end rooms or in directions you don't want to go, it might be better to save PWR by not hacking them. It's also sometimes possible to get past an unhacked camera by staying in cover, depending on the room layout.

The most dangerous time to be seen by a camera is at the start of the enemy turn. If an enemy-controlled camera finishes rebooting, and sees your agent, then a guard will come to investigate your agent, even if you have previously observed that the guard would do something else, and you will have no chance to distract them during the enemy turn. Pay particular attention to inactive cameras at the start of alarm level 1 (or alarm level 2 on Beginner mode). If you reboot a camera using an EMP Pack or Fool, use the Incognita view to check how many turns it will take to re-activate.

It may sometimes be infeasible to hack cameras due to a shortage of PWR, or Paradox. If it's an emergency, and you don't have a Cloaking Rig or Archive Prism's Holo Projection Mesh, then you might just have to get seen by a camera — or even more than one camera. The guards will investigate the first tile you're seen on, so you can still end your turn in cover even if your hiding place is seen by a camera. On the next turn, if you are still seen by the camera, you can avoid triggering it again by staying still and not peeking.

Stepping into a camera's vision is also a possible way to distract a guard, although other distraction techniques such as making noise or stepping into their peripheral vision are preferable to avoid raising the alarm tracker.

It is always safe to be seen by cameras on the same turn you leave the facility, because the enemy won't get another turn anyway.