You are here: index » daemons
daemons:index

The daemons are just doing their jobs. Try not to disturb them.
—Incognita

Daemons are security measures with harmful effects. Daemons can be installed on mainframe devices, so that the daemon's effect is triggered when all firewalls on the device are broken. Daemons can also be triggered by the programs Faust and Fool, walking through an Infrared Emitter, using the Overclocked Neural DART, or by scripted events in some missions. 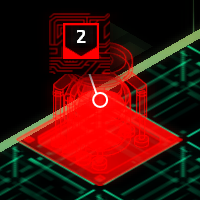 A daemon is installed on this device.

The following daemons can be installed randomly on some mainframe devices. Daemons are never initially installed on mainframe devices at mission difficulty 1, but always appear on some devices at mission difficulty 2 or higher, excluding Security Cameras. Daemons can also be installed on devices (including cameras) during a mission by triggering Fractal or Fractal 2.0, accessing the Primary Server Terminal in a Server Farm mission, or knocking out a Modded guard.

If a device has a daemon installed, it will appear in the Incognita view with a dark red textured border. The name of the daemon installed on the device can be revealed by hacking a Daemon Database, or by using Decker's Neural Networking ability, a Scan Chip, or the program Daemon Sniffer.

Daemons triggered by all causes other than scripted events are also chosen randomly from this list. The daemons Authority, Felix and Mask are never installed on devices in the OMNI Mainframe mission.

Found in the Contingency Plan DLC.

The following daemons are triggered by scripted events in the OMNI Mainframe mission.

From mission difficulty 5 onwards in Endless mode, a random archdaemon will be triggered at the start of each mission. Archdaemons are never reversed.

Found in the Contingency Plan DLC.

Finally, our luck is turning about. Now press the advantage!
—Central